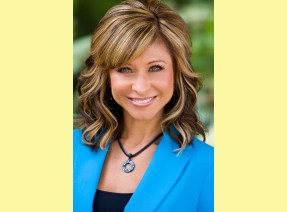 Three-time Emmy Award-winning journalist Catherine Anaya anchors CBS 5 News weekdays at 5pm, 5:30pm, 6:30pm and 10pm.
She joined CBS 5 News in January 2003.  The Arizona Associated Press Broadcasters Association named Catherine 'Anchor of the Year' for 2003, the same year in which she was named "Best TV Newcomer" by Phoenix Magazine, which also named Catherine and co-anchor Sean Mclaughlin “Best Evening News Team” in 2010.
In 2006, she was honored with her third Emmy Award for her report about twin boys burned in an apartment explosion, their recovery and their plight to remain in the U.S. for medical treatment.
Catherine is a versatile journalist in both broadcast and print.  She currently writes a monthly column for Latino Perspectives Magazine.  To view Catherine's past columns, click here.
In May 2007, Catherine won the first place award for Magazine commentary/analysis from the Arizona Press Club for her magazine column about the two Honduran boys with burn injuries.
She previously wrote an award-winning monthly parenting column for Los Angeles Family Magazine.  In October of 2004, Catherine proudly co-anchored a presidential debate special for CBS 5 News with the legendary Walter Cronkite.
Prior to CBS 5 News, Catherine freelanced as a Special Correspondent for the television daily newsmagazine "Extra." Before that, she spent four years at KCBS-TV, in Los Angeles where she anchored the morning news, co-hosted an afternoon women's talk show and earned an Emmy Award nomination for her reporting from El Salvador following the aftermath of Hurricane Mitch.
CBS 5 News marks Catherine's return to the valley. She anchored the weekday morning and noon newscasts for KPNX-TV from 1992 to 1998. During her six years there, Catherine won her first Emmy Award for reporting. She also worked as a health reporter and helped launch the award-winning breast cancer awareness program Buddy Check 12. Before that, Catherine anchored the news in South Bend, Ind., and McAllen, Texas.
Catherine is an active member of the National Association of Hispanic Journalists. She is the current Vice President and current board member of the Arizona Latino Media Association (ALMA) and is a former member of the Fresh Start Women's Foundation Auxiliary Board and the Arizona Hispanic Chamber of Commerce Board of Directors.
Catherine is a graduate of the Valley's Hispanic Leadership Institute (HLI), Class of 2004 and is the recipient of the HLI Distinguished Alumni Award. Catherine was also selected to the '40 Hispanic Leaders under 40' list, recognizing committed individuals working toward the greater good of the community. She also traveled to Israel as part of a group of National Latino Leaders and Journalists invited to the country for a week-long educational seminar.
Catherine has been honored with awards, including the ASU Gamma Alpha Omega Sorority's Latina Excellence Award for Arts/Media and the Girl Scouts 2006 Women of Distinction World Award of the Arts for championing creative endeavors of all types.
Catherine is also a proud mother of two, a motivational speaker, founder of the Sisterhood of Super Women and an avid runner. She's run eight marathons since 2005, including the 2007 Boston Marathon during a Nor' Eastern storm. She most recently ran the Boston Marathon again in 2011.
To Follow her on social media: