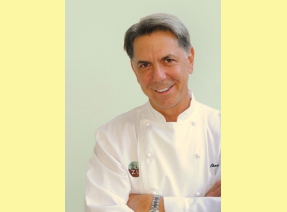 Charles Wiley enjoys a career that spans more than 35 years. During this time, Wiley has earned national acclaim for his innovative cuisine and natural presentations. His signature cooking style takes advantage of local, seasonal ingredients, and time-honored flavor marriages; dishes which tend to be light, yet intensely flavored and robust.
As executive chef for Hotel Valley Ho, Wiley is responsible for the day-to-day development and operation of dining venues, which include the hotel’s signature restaurant, ZuZu.
Wiley held the position of executive chef at Deer Valley Ski Resort and The Stein Eriksen Lodge in Park City, Utah. He then went to The Boulders Resort in Carefree, Arizona, where he directed the cuisine for ten years as executive chef and director of food and beverage. While at The Boulders, he was awarded a scholarship to The School for American Chefs under the direction of Madeline Kamman. In 2001, he opened Sanctuary on Camelback Mountain as executive chef and director of food and beverage, where he was instrumental in the concept, menu design, and cuisine for all dining outlets, including elements restaurant. Wiley remains involved in Sanctuary’s operations as culinary director for Westroc Hotels & Resorts.
Chef Wiley has received numerous culinary honors. He was named one of “The Ten Best New Chefs in America” by Food & Wine magazine, and the James Beard Foundation recognized him as “One of the Best Hotel Chefs of America”. It invited him on four occasions to cook at The James Beard House in New York, and in 1998, he was invited to prepare the entrée for The James Beard Journalism Awards Dinner. Additionally, in 2000, he was inducted into the Scottsdale Hall of Fame as Chef Honoree.
Wiley has been featured in PBS’ “Savor the Southwest” with host Barbara Fenzl, and can be seen preparing dishes on “Your Life A to Z” weekly on KTVK Channel 3 in Phoenix. Nationally, he has appeared on NBC’s “Today Show” with Katie Couric, ABC's “Regis & Kelly”, and has been a guest on The Food Network. His cuisine has been featured in numerous food publications including Food & Wine, Bon Appetit, The Wine Spectator, Food Arts, Art Culinaire, Phoenix Home & Garden, Phoenix Magazine, Arizona Foothills, and many others.
back to main page