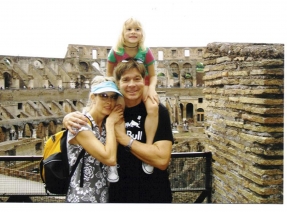 Kellie and Kirby Chambliss are an internationally-renowned competitive aerobatic couple living an exciting and busy life but still finding time to eat well and eat healthy. The secret is wife, Kellie’s, cooking who shares her thoughts on cooking below.
Kirby Chambliss is a World class aerobatics pilot and competitor in the Red Bull Air Race World Series where he won the championship in 2006.

Winning top honors in his very first aerobatic contest, Chambliss worked his way up to the elite "unlimited" level. In 1997, he became member and then captain of the US Aerobatic Team. He won five U.S. national championships and multiple medals at the world championships.
Chambliss enjoys performing in traditional air shows throughout the year when he is not training or competing. In fact, Chambliss will be performing at Luke Air Force Base March 17-20th.

To stay in shape for enormous g-forces and exact timing, he trains three times a day and four days a week in the sky. ... and eats healthy thanks to Kellie.
Kellie advocates home-cooked meals when possible and nutrient dense foods as part of your diet.
A pilot with more than 24,000 logged hours of flying, Kirby Chambliss, his wife and fellow pilot, Kellie and their daughter Karly Nicole live in Eloy, Arizona.
You can find out more about them on their web site and also on Facebook.