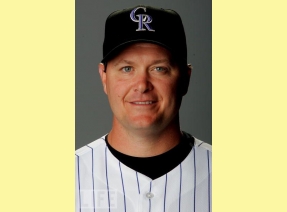 Since we're in the thick of the baseball season and a favorite time to go out to the ballgame is summer, we're featuring another baseball player on Fill Your Plate's Celebrity Q&A.

Herges is an alumnus of Illinois State University and is the brother-in-law of former Major League Baseball player Todd Hollandsworth.

Herges tied outfielder Steve Finley for being one of only two players in MLB history to play for every team within a five-team division. Herges has appeared for every team in the National League West. He tied this record on April 19, 2007.

Herges appeared in the 2007 World Series as a member of the Colorado Rockies, where they were swept 4-0 by the Boston Red Sox

He has been hired by the Los Angeles Dodgers as a minor league pitching instructor. And will be the pitching coach for the Arizona League Dodgers.

And, Matt loves food. We asked him a few questions and asked him if he'd mind being a part of our Fill Your Plate. He said, "You bet!" So below are some of his answers (short and sweet) to our Celebrity Q&A


back to main page