Sweet Corn Season Begins In May In AZ

Arizona has one of the longer sweet corn seasons in the country which runs from late May all the way through September. In the northern and southern parts of the state they begin to harvest in mid-July. Central Arizona’s sweet corn season runs late May to Mid-July. The earliest known evidence of domesticated corn is 8000 B.C. in Central America, however there is indirect evidence that corn may have even been domesticated as early as 10,000 years ago. According to the Encyclopedia of American Indian Contributions to the World, the Mayans would chew on the sweet corn leaves like we chew gum today.

The name “corn” was once a more generic term that related to whatever grain was prevalent in a certain region. This would mean that in England wheat was, at one time, referred to as corn, and in Ireland and Scotland “corn” would have actually been oats. It was the early American settlers that first referred to “corn on the cob,” or “corn” as we know it now. Today corn is the third most important crop in the world and grows on every continent except for Antarctica.

Around 14,000 lbs. of sweet corn can be grown on only one acre of land, and depending on the cultivator type, the crop could be ready for harvesting within 65-90 days. A corn plant will typically grow to be 7-10 feet tall, though sweet corn plants are usually a few feet shorter. Ears of corn always have an even number of rows of kernels, usually 16. And, that annoying silk on the top – each one is responsible for one kernel of corn on the ear. The average ear of corn contains between 500 and 1000 kernels of corn. 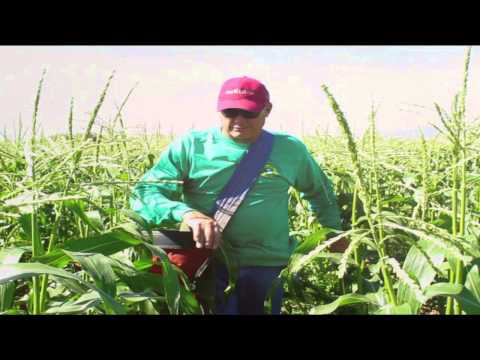 As a traditional summer food, sweet corn is served around the world in many a backyard barbecue, and family gathering. One of the best reasons to enjoy Arizona sweet corn this summer is that not only is it full of flavor, it is also loaded with nutrients! Sweet corn delivers vitamins A and C, potassium, and thiamine.  It is packed with antioxidants, full of fiber, and cholesterol free. It is also a whole grain, and who doesn’t need more whole grains in their diet?  The USDA recommends the average adult consume about 6 oz. a day of grains, with at least 3 oz. being whole grains.

When buying sweet corn, you should look for ears that are well-formed with tight husks that are light green in color, and golden-brown silks. If the husk is dry, avoid purchase, as this means the stock is old, and out of flavor. You could also buy the fresh-husked corn cobs wrapped in plastic. On these, look for a harvest date, and only buy the most recent, as the kernels will turn sugars to starch and quickly lose their sweet flavor. When you bring it home you should use your corn as early as possible to avoid losing its juicy, sweet flavor. If you plan on storing them, you should do so in the refrigerator, preferably with its husk intact to maintain optimal flavor and moisture. Corn can stay up to 2-3 days when stored at 90% humidity and 32 °F.

Sweet corn can be enjoyed in many ways. You can boil or steam and butter it, or even grill it. Boiled corn kernels are excellent in salads, stews, soups, omelets, fried-rice, etc. Corn chowder is a favorite meal starter in many parts of the world. After boiling the cob you can use the water along with carrots, parsnips, celery-stalks, onion, and so on to make a delicious vegetable stock.

However you choose to make it, one thing is certain, sweet corn is earrisistible!

Share This:
This entry was posted in Ag Facts, Fun Food Facts, In Season and tagged Arizona produce in season, Fill Your Plate, food, in season, local food. Bookmark the permalink.