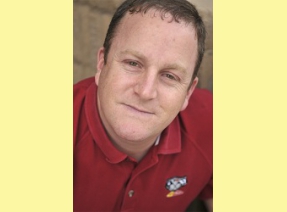 Jon Bloon is in his 9th season as the Public Address announcer, backup play-by-play broadcaster and radio & TV host for the Arizona Cardinals.
Along with working for the Cardinals, Jon is also the host of the Phoenix Suns “Planet Orange Pre and Post game shows” and a top fill in host on Arizona Sports 620 in Phoenix, the flagship home for the Cardinals, Suns, Diamondbacks and Arizona State University.
The man many refer to as “Bloomer” served as a play by play voice and sideline reporter on Touchdown Radio’s national broadcasts of the College Football Game of the Week, and works behind the scenes for CBS Sports’ nationally televised coverage of the PGA Tour at the Masters and Pebble Beach.   He can also be seen locally as a frequent guest analyst on ABC 15’s Sports Sunday as well as CBS 5, 12 News, and AZTV’s “McMahon Group” here in Phoenix.
When he’s not on the air, Jon stays busy as the Founder and CEO of golfmix.com, an online golf community launched in early 2011 and currently the leading source of golf course reviews in Arizona with expansion into other regions expected for this fall.
Jon graduated from Syracuse University with a major in Broadcast Journalism and the honor of being named the Bob Costas award winner in 1997.  While at S.U. he called the action of Orangemen football, basketball and lacrosse as well as minor league baseball for the Houston Astros single-A affiliate in Auburn, NY.
After graduation, he was hired by Sportsradio 1130 The Fan in Detroit, where he served as an Anchor/Reporter/Host for six years.  In addition to covering the Lions, Red Wings, Tigers, and Michigan and Michigan State, Jon was a host of the Pistons pregame, halftime and postgame shows and handled the play by play duties for Oakland University basketball and Wayne State University football.  In addition, he spent seven years as a co-host of a syndicated radio and TV show called “Michigan Golf Live.”
Jon, his wife Jill & their dog Cal moved to Arizona in November of 2003. They had their first baby, a little girl named Marlee in July of 2006, and their 2nd daughter Anya was born in January of 2009.