Imagining Arizona Agriculture in the Next 20 Years

By Pat Rorabaugh, Ph.D., Lecturer in the School of Plant Sciences and a hydroponic specialist with the Controlled Environment Agriculture Center, University of Arizona.

The Rillito Creek in Tucson has been running for a couple of months, a beautiful sight and a result of the much needed rains at the beginning of this year.

Water…  It is the life blood of our desert state. Two hundred years ago, the rivers ran year-round, but they dried up with the increasing population. Twenty years ago Tucson was the last large metropolitan area in the nation to be sustained on well water alone; but no more. Up until the beginning of the 1990’s you could depend on the summer monsoon bringing a cooling shower each afternoon; but the dependable monsoons have wavered of late. Over the past 20 years much of Arizona has experienced drought conditions and we still need more rains to alleviate the current drought. Couple this with the fact that Arizona is the 2nd fastest growing state in the nation and it becomes obvious why we need to be water conservative. As the Bob Dylan song goes, “The times, they are a changing.”

Arizona has been known for its 5 C’s: cattle, citrus, climate, copper and cotton (in alphabetical order). Four of those 5 C’s relate directly to agriculture and out of the state’s 72.7 million acres, about 26 million acres, roughly a third of the land, is in farms and ranches, according to the United States Department of Agriculture’s (USDA) Arizona Agricultural Statistics Service. This includes everything from large corporate operations to small family farms.

Citrus and cotton, along with other field crops, have flourished with the long, warm days and Yuma is known as the winter lettuce capitol of the world. Tourism has also flourished during the winter as people from the northern climes flock to Arizona. But this high year-round light has also attracted greenhouse growers and a new industry to the region: controlled environment agriculture (CEA).

Twenty years ago a group of greenhouse growers, originally from northern Europe, came to southeastern Arizona. They established Eurofresh Farms in Willcox and brought greenhouses (structures that allow for precise environmental control) and hydroponics (growing without soil using a complete nutrient solution) to Arizona. Since 1990 they have expanded from 10 to over 300 acres (Willcox and Snowflake) producing about 100 million pounds of tomatoes a year along with a smaller amount of cucumbers. Other greenhouse operations in the Willcox area, producing fruits, vegetables and flower/ornamental plants, include Willcox Greenhouses LLC, Sunizona Family Farms and Fischer Nursery of Willcox.

And while CEA and hydroponics may not be economical for cotton, wheat, barley and other traditional field crops which will still be grown in the field, greenhouse hydroponics is highly advantageous for high-cash-value crops such as on-the-vine tomatoes, English cucumbers, colored bell peppers, micro-greens, herbs and even year-round specialty lettuce. Also, for current Arizona farmers and ranchers, greenhouse hydroponics could be a supplement to what is already grown.

Two other factors are helping spur further interest and even investment in CEA:  food security and safety. Arizonans, like most around the country, have come to depend on imports for much of our food with the average meal traveling the proverbial 1,200 miles to reach our plates. People want to know where their food is coming from and that it is safe to eat. For city dwellers, with limited land, local/urban gardens and even CEA are slowly becoming a way to grow fresh fruits and vegetables for family use or for sale at the farmers’ markets. Community supported agriculture (CSA), with smaller farms close to population centers, is gaining acceptance. And, whether coming from large or small farms or ranches, Arizonans are starting to look for the “Grown in Arizona” label, perhaps even more important to some than the “organic” designation.

Anticipating the Next Couple Decades

The past 20 years have certainly seen some changes to Arizona agriculture; but the next 20 years will bring plenty more. A wide scope of opportunity in advancements exists.

Water conservation: Water is our most precious resource and all Arizonans are going to have to take the decreasing water supplies and water quality seriously if this state is to survive. Whether crops are grown in soil or hydroponics, water conservation must be at the forefront of Arizona agriculture. One way to conserve water is to put it right where it is needed by using drip irrigation. As an example, cotton is now being grown very successfully in Coolidge and Maricopa, Arizona using subsurface drip irrigation, and drip is a standard practice for greenhouse growers. In the future, as water resources decline further, many other field crops could and should be grown using drip irrigation.

Water recycling:  Why use water once when you can recapture it for multiple uses?  Commercial greenhouse hydroponic growers do this now by recycling their nutrient solution. However, both greenhouse and field growers could also recycle water from the air itself. Water condensers in the field or the greenhouse could pull water directly from the air for use back in the greenhouse or field, according to studies conducted at the UA/CEA on this method of water recycling. Water condensers are not a new idea and were even described in the 1970s science fiction movie Star Wars as “moisture vaparators” used on the mythical desert planet, Tatooine. The reclaimed water was used to grow crops in subterranean hydroponic farms!

Aquaponics: What about using the same water for two crops?  Aquaponics is the technique for recirculating water between fish and plants to create a sustainable ecosystem. The fish are fed and then provide nutrient rich water upon which the plants thrive. As the plants take up the nutrients they return clean water to the fish. Tilapia is perfect for Arizona since it is adapted to hot climates and has become a regular selection at most restaurants. Several crops can be grown with Tilapia including lettuce and basil, according to researchers that have studied optimal plant to fish ratios at the UA/CEAC.

Rain harvesting: Though we live in a desert, when it rains it can pour!  Rain water is quality water without any contaminants that can be channeled from homes, buildings, barns, etc. and collected to provide fresh water for animals and crops. For greenhouses, this water could be used in the evaporative cooling system to supplement water from wells or city water supplies. For outdoor animals, this water could be used in misting shelters to keep the animals cool.

The Arizona Sun: Although water may be our most precious resource, light is our most abundant. In 20 years, Arizona has the potential to become the solar energy capital of the nation with solar energy farming. Just as farmers and ranchers across the Great Plains region of the United States also farm wind power (the turbines turn slowly over wheat fields or cattle pastures), farmers and ranchers in Arizona could be farming solar power. Solar technology has improved and with the current emphasis on alternative energies and future technological improvements, the costs of such systems will become more reasonable and the systems far more efficient.

For farmers, solar panels could be covering their homes, equipment storage buildings and shops as well as crop processing facilities. For ranchers, solar panels could provide much needed shade for animals. And, not to leave out city dwellers, solar panels should cover every home and building in Arizona. Solar electric could power everything from the toaster in the kitchen to the computers in the greenhouse; from the milking machines at the dairy to the combine in the field.

Other Alternative Energies – Biofuels & Biomass: Several crops have been looked at recently as possible alternatives to fossil fuels. One plant that shows real promise as a biofuel is algae (and unlike corn is not an existing food crop). Grown in various ways (tubes, raceways, ponds) algae is harvested, the oil extracted by compression and the residual biomass could be used as an animal feed. Also, leftover plant material from all sources could be pelletized and burned in biomass furnaces. Sunizona Family Farms in Willcox, Arizona has recently begun using pelletized pecan hulls to heat their greenhouses.

For more on algae, do a search on www.azfb.org using the key word “algae.”

Protecting Crops from Diseases – Grafting. Grafting tomatoes onto vigorous, disease resistant root stocks has been a common practice in greenhouse production for years. However, melon farmers may benefit from grafting as well. They have serious problems with diseases in the field which can destroy a crop just before harvest. With methyl bromide on the brink of being banned, a UA / CEA research group has had great success with grafting melons onto disease resistant root stocks and is currently conducting field trials with Arizona farmers. As diseases become more prevalent, grafting may hold the key to successful production. Also, with year-round high light, Arizona has the potential to become a center for transplant production, producing high-quality grafted transplants for both field and greenhouse use.

What will Arizona agriculture look like in 20 years? I’ve mentioned just a few possibilities but one thing remains to be said. Any advancements in Arizona agriculture will only occur if the next generation has an opportunity for a quality education. Well-educated agriculturalists and skilled technical support will be crucial. Education will be the key to unlocking a sustainable future for Arizona.

Editor’s note: Dr. Rorabaugh teaches Introduction to Hydroponics and Controlled Environment Agriculture during the Fall Semester and Advanced Greenhouse Crop Production in the Spring. If you have further interest in controlled environment agriculture and hydroponics go to www.ag.arizona.edu/ceac 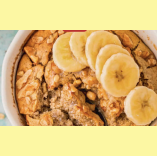 Banana Bread Baked Oatmeal
1. Blend 1/2 banana with the rest of the ingredients until a smooth mixture 2. Pour mixture into a greased baking dish (preferably a small round, I use a six-inch) 3. Lay the other half of sliced banana over the mixture 4. Bake at 350 degrees for 30-35 minutes